Every eBook and Audiobook on this website can be immediately downloaded for free and accessed on just about any computer, smartphone, or tablet.

We also provide free softcover copies of our books. If you are interested in receiving a printed copy of any of the books on this page, please email us at , and tell us a little about yourself and why you are interested in our resources. Your request will be seriously considered, and you may receive a follow up email from us. Alternatively, you can call Rod Costa at 330-419-1527 to discuss your request. 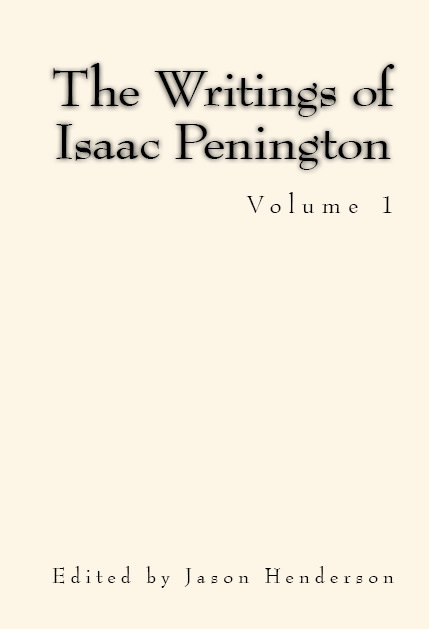 Isaac Penington (1616-1679) was the son of a prominent English politician, and the father-in-law of William Penn, founder of Pennsylvania. Though born into a family of wealth and reputation, Penington's heart was set upon things above from his earliest days. Even as a child, he recognized that the religion of his day stood in the will and understanding of man, in outward practices, duties, and scriptural truths that were professed but not truly possessed. Isaac Penington longed for more. Motivated by an insatiable hunger for truth, he sought the Lord with all his heart and discovered a Christianity that stood in, and flowed out from, the light and life of Jesus Christ reigning in the inner man. (415 pages) 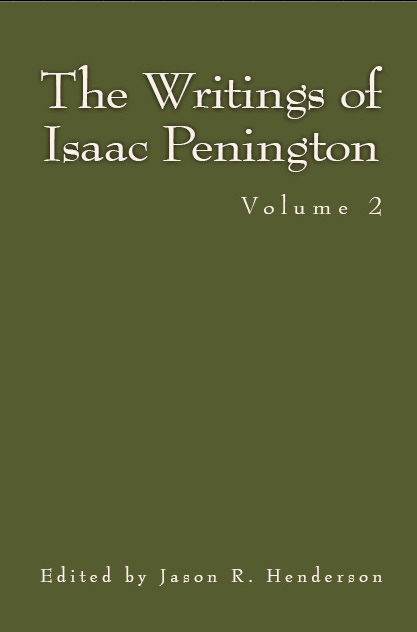 Isaac Penington (1616-1679) was the son of a prominent English politician, and the father-in-law of William Penn, founder of Pennsylvania. Though born into a family of wealth and reputation, Penington's heart was set upon things above from his earliest days. Even as a child, he recognized that the religion of his day stood in the will and understanding of man, in outward practices, duties, and scriptural truths that were professed but not truly possessed. Isaac Penington longed for more. Motivated by an insatiable hunger for truth, he sought the Lord with all his heart and discovered a Christianity that stood in, and flowed out from, the light and life of Jesus Christ reigning in the inner man. (432 pages) 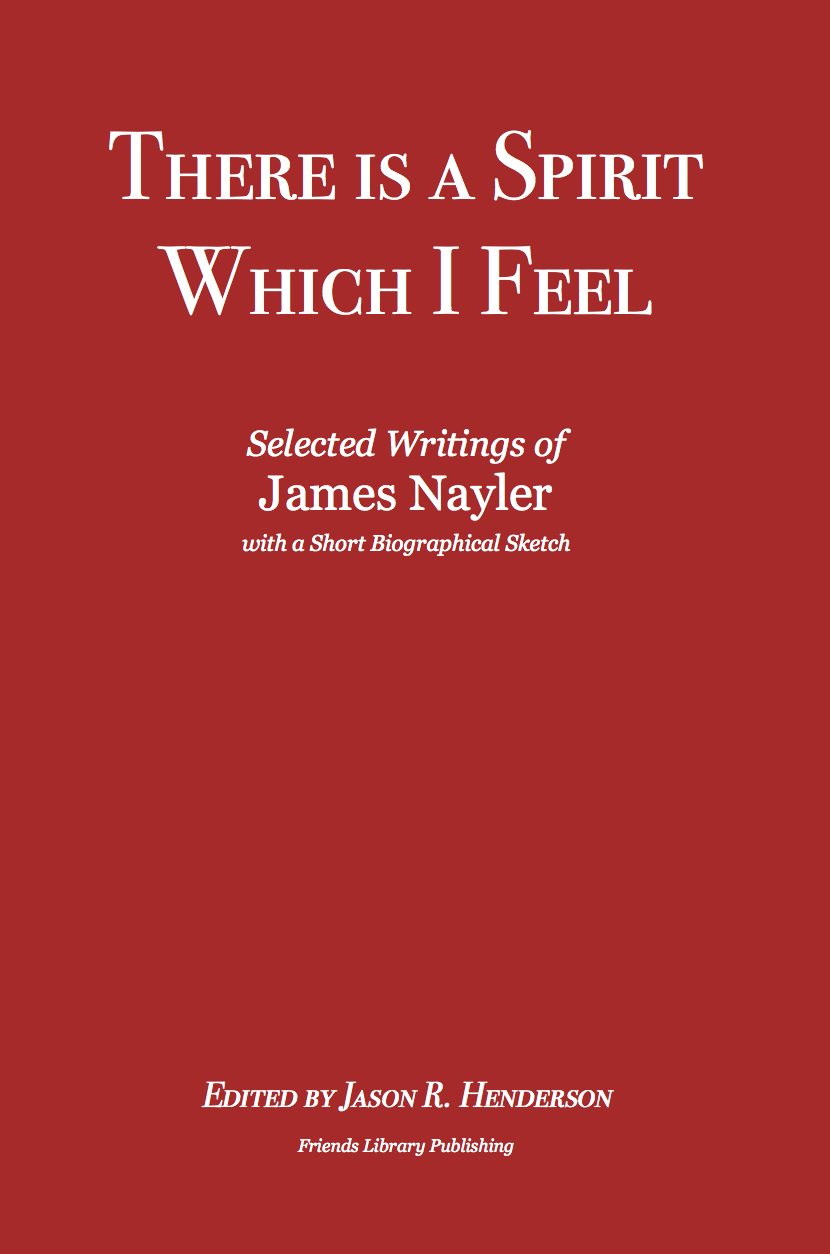 Book: There is a Spirit Which I Feel

James Nayler was a prominent leader and gifted minister in the early Society of Friends in England. Though a farmer by trade, and a man of limited education, his deep spiritual understanding, piercing discernment, and powerful communication of the gospel caused multitudes to acknowledge that he preached in the demonstration of the Spirit and power, as one having authority, and not as the scribes. Sadly, he is best known for a single (and much regretted) act of folly committed in a time of weakness and temptation, when, “because of the abundance of revelation” and the unchecked flattery of a few imprudent admirers, he accepted greater praise than is due to any man. This modernized edition was prepared from a strong desire that the writings of this pious and experienced Christian not be lost in history. 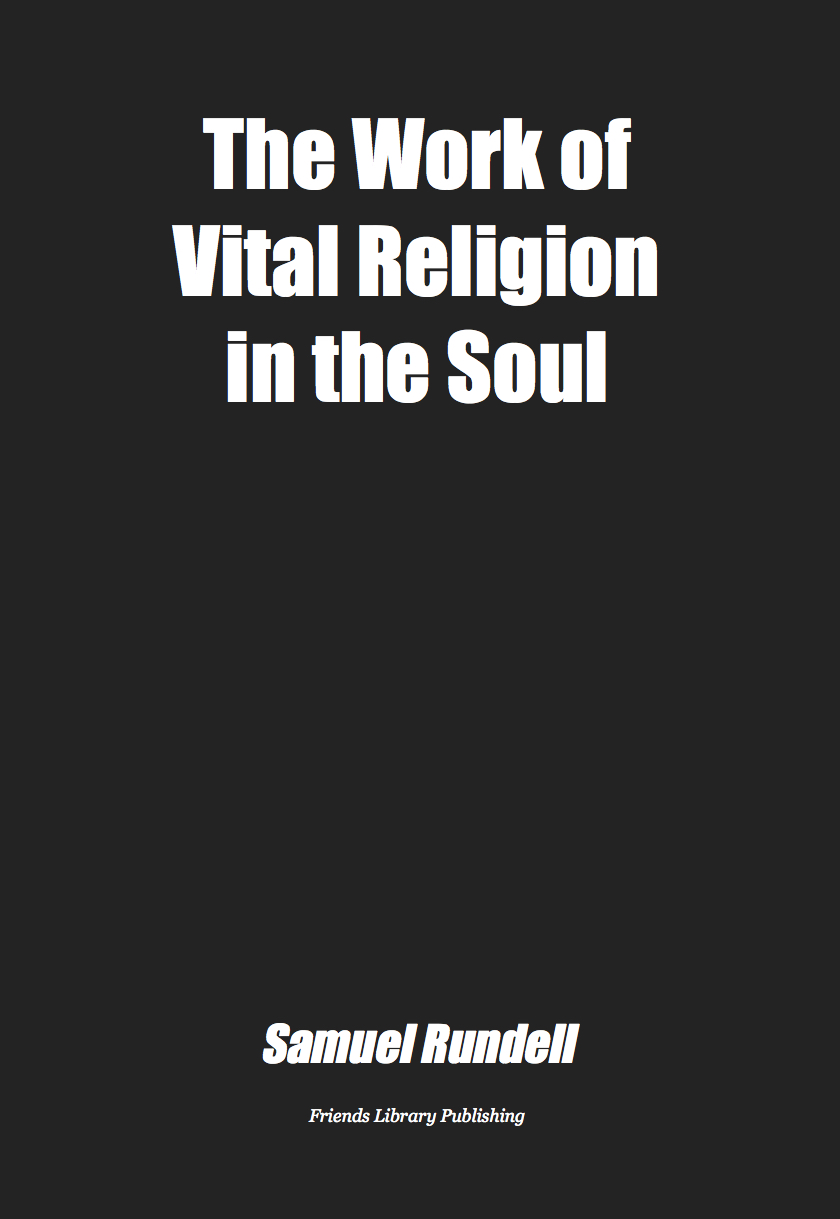 Book: The Work of Vital Religion in the Soul

“Do you believe in Christ, in reference to His spiritual appearance in your own soul? Have you, in the metaphorical language of Scripture, opened the door of your heart unto Him, when, by the secret convictions of His holy Light or Spirit, He has knocked there for admission? Have you in this way received Christ to be your leader, your baptizer, your high-priest and your king? Has it become your daily concern to obey Him in all things, avoiding in every part of your conduct and conversation that which the light manifests to be evil, denying yourself and taking up the cross in respect to every pursuit and gratification which this divine Monitor does not allow, however earnestly pleaded for by your natural inclination and desires? And finally, do you witness, through submission to the baptizing operation of His Holy Spirit, the work of regeneration begun, and gradually progressing in your soul?” 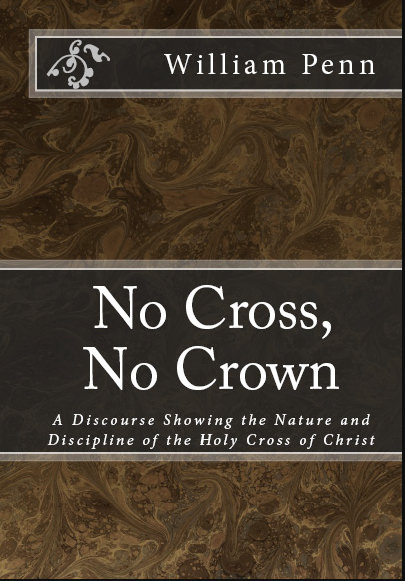 Book: No Cross, No Crown

The classic treatise “No Cross, No Crown” was first written while William Penn was imprisoned for his faith in the Tower of London in 1668, when only twenty-four years of age. Later in life, Penn greatly enlarged upon the original publication, treating exhaustively upon the particular sins of pride, avarice, and luxury, and adding two lengthy collections of testimonies from other authors in order to further substantiate his position. This edition is unique in that it offers the reader a careful modernization of Penn's beautiful but somewhat archaic English, and has been abridged to contain only the principal and indispensable chapters of the treatise, wherein Penn clearly presents the nature, power, and experience of the daily cross of Christ, explaining what it is, where and how it is to be taken up, and the manner of its working in the true disciples of Christ.

This book is a combination of two separate publications by William Penn, one being his book Primitive Christianity Revived (first published in 1696), and the other, A Brief Account of the Rise and Progress of the People Called Quakers, which originally served as the introduction to the Journal of George Fox (published in 1694) but was later printed separately. The two publications overlapped in their scope, both dealing (in various degrees) with the rise of the Society of Friends, and the distinct principles and practices of this people, and it was thought that these short books could be combined and interwoven in such a way as to present the reader with a more thorough presentation of these subjects than either publication could do individually. Penn begins with an overview of the various dispensations of God in the world, and then recounts the extraordinary work of the Lord in restoring and reestablishing the true light, life, power, and purity of the primitive church through the outpouring of His Spirit in the early Society of Friends.

Book: Truth in the Inward Parts

"Behold, You desire truth in the inward parts, and in the hidden part You will make me to know wisdom." —Psalm 51:6

This book contains the stories of ten men and women who knew the transforming work of Truth in the inner parts. Amidst a sea of Christian practice and profession, these believers would settle for nothing less than the light, power, and righteousness of Christ reigning in their purified vessels. They not only found the Pearl of great price by His own inward appearing, but they then sold all to buy this treasure, counting all things loss for the excellence of the knowledge of Christ Jesus their Lord. 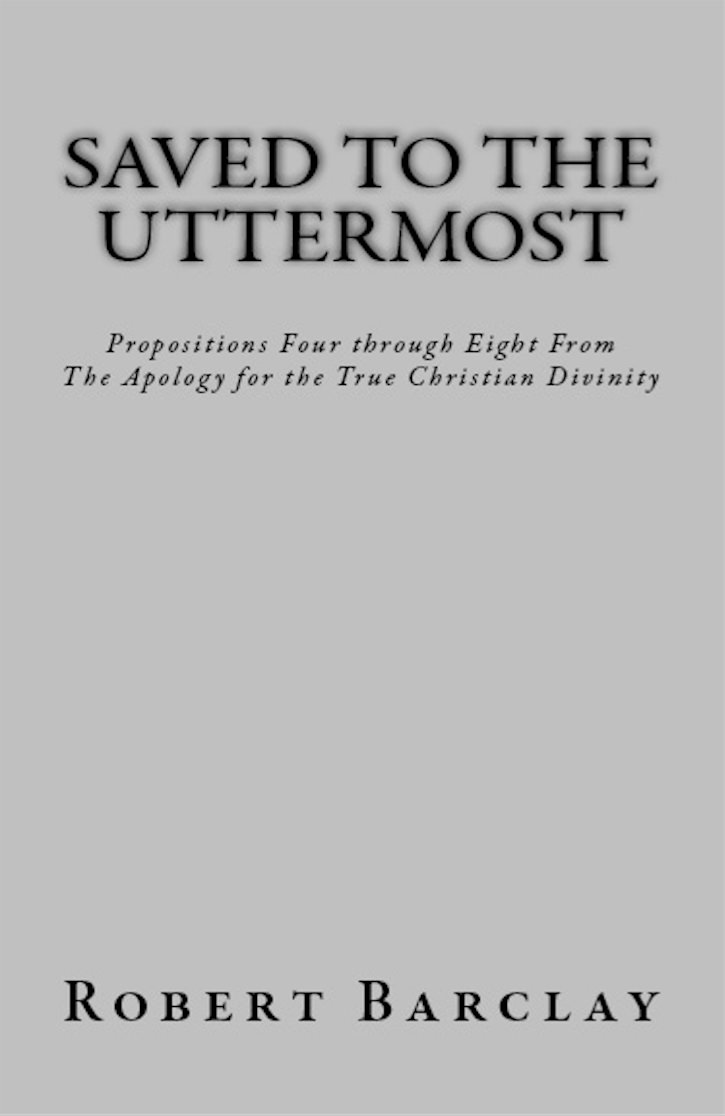 Book: Saved to the Uttermost

Robert Barclay (1648–1690) was a Scottish Quaker, and one of the most eminent writers among the early Society of Friends. His Apology for the True Christian Divinity (from which this book is taken) was first published in 1675, and came to be considered the definitive exposition and defense of Quaker principles for the next 200 years. Saved to the Uttermost contains five of the original fifteen propositions from Barclay's Apology, treating upon the fall, redemption, justification, and perfection of man. 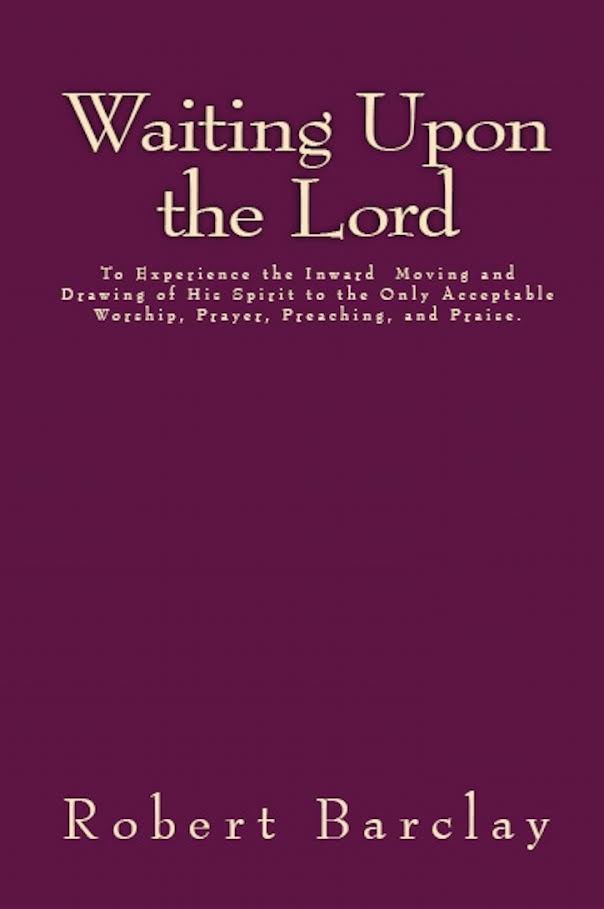 Book: Waiting Upon the Lord

Robert Barclay writes, “All true and acceptable worship to God is offered in the inward and immediate moving and drawing of His own Spirit.” It is not hard to agree with such a statement, but who has indeed stood still to see the salvation of the Lord, and known the dawning of His inward Day? Have we waited upon our God to separate the precious from the vile within, to differentiate between the pure operation of His Spirit and the wild rovings of our own soul? Have we truly known and obeyed His inward stirrings and teachings, or does the Seed of God lay buried in Christian hearts beneath a mass of superstition, assumption, and fleshy, religious activity?

Book: The Original and Present State of Man

In 1767, a book was published advancing many sentiments critical of the Society of Friends, and more particularly attacking the principles propounded in Robert Barclay's Apology for the True Christian Divinity. In response to this publication, Joseph Phipps took up the pen in 1772 to clear the Society from many unjust and untrue charges, and to defend the truths of the gospel as set forth by early Friends. His refutation was thorough and convincing, clarifying many of the leading principles of the Quakers, and exposing and countering the various errors of his opponent. The full title given to this work was—"THE ORIGINAL AND PRESENT STATE OF MAN - Briefly Considered - Wherein are shown: The Nature of His Fall, and the Necessity, Means, and Manner of His Restoration, Through the Sacrifice of Christ, and the Sensible Operation of that Divine Spirit of Grace and Truth, Held Forth to the World by the People Called Quakers." 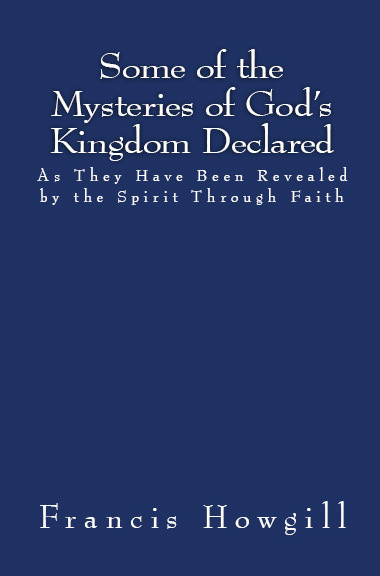 Book: Some of the Mysteries of God's Kingdom Declared

Francis Howgill (1618–1668) was a powerful minister of the gospel in England who suffered great persecution and eventually died in prison for "the Word of God and for the testimony of Jesus." This short book contains a remarkable explanation of the Day of the Lord, and a powerful description of the Holy Spirit's work in the heart of man. 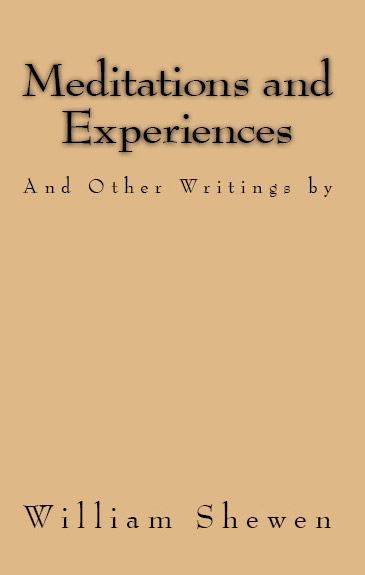 William Shewen (1631-1695) was a very serviceable man on truth's account in several ways, and an elder in the church, being of a sound judgment and understanding in the truth. He had very clear openings in relation to the work of truth, and also of Satan's wiles to hurt and hinder the progress of it (having had long experience of both), and therefore could advise and direct the Christian traveler how to keep in the one, and be preserved out of the snares of the other.

Our packages are sent Media Mail through the USPS and can take as long as two or three weeks to arrive (although they usually arrive more quickly). Please notify us if you have not received your order in a timely manner.

All of the resources are available completely for free through the generosity of our donors. If you would like to contribute to keeping these resources completely free, you can make a donation through this page